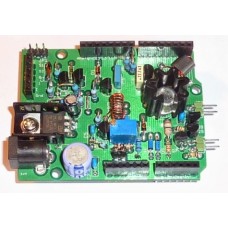 Please Note: This is not a complete transmitter system – you will need to provide RF signals to transmit and a lowpass filter appropriate to the band(s) on which you intend to transmit. Based on the “Sudden” transmitter, designed by Rev George Dobbs, G3RJV, it can be keyed manually, but is intended to be operated by a microcontroller and is, by virtue of the physical “shield” format, particularly useful in Arduino applications, such as the systems accompanying the “Occam’s Microcontroller” article published by Paul, mØxpd, in SPRAT 156. In addition to the PA and keying stages, there is a buffer / amplifier stage and a power supply stage, which are provided to integrate this module into a larger system (perhaps including a DDS system and a receiver as well as the Arduino). This buffer can be used with optional inputs on the board to support other applications and experiments beyond the beacons and CW transceivers currently available (such as DSB phone applications). The shield includes a buffer/amplifier stage on the input, allowing it either to derive RF from the "RF Bus" which is a common feature of all my Arduino devices (driven by the Kanga/m0xpd DDS Shield) or from any other source (such as a mixer for sideband signals). The shield also hosts a power supply to derive 5V for the Arduino from the conventional "radio" 12V power supply. The DDS Shield is pretty power-hungry and when its 5V is derived from the 12V line by a linear regulator, there's quite a lot of power dissipated - so I think it best to have all the "hot" objects (like this regulator and the PA final) on one shield, where they can sit basking at the top of the "stack".

The keying arrangements follow those used in my own "Ugly Weekender-derived" Tx shield, whilst the remainder of the circuit follows George's words and music closely.

Here's the system with the individual functional blocks annotated... Click Here for the latest update on software and information complimenting Paul m0xpd artical in latest SPRAT - "Occam's Microcontroller" , i.e. new version of the code has been produced, due to the fact that original LCD used is no longer available.

The new version allows the use of a 16*4 alphanumeric LCD + I2C interface module. These are available on the Arduino page. Please note!! You will need the correct LCD Library installed to ensure correct operation of the LCD.